Each person was allowed only one suitcase to take with them. They were forced to leave their homes and businesses with no promise of return.  The FBI searched homes of Japanese Americans often without search warrants, seeking any items identified as being Japanese.

With such a threat, family photos and memoirs were destroyed, thrown into bonfires in submission to the orders.

This is a story of an American Family affected by Executive Order 9066.

This is a story of my family, as we are of Japanese ancestry. 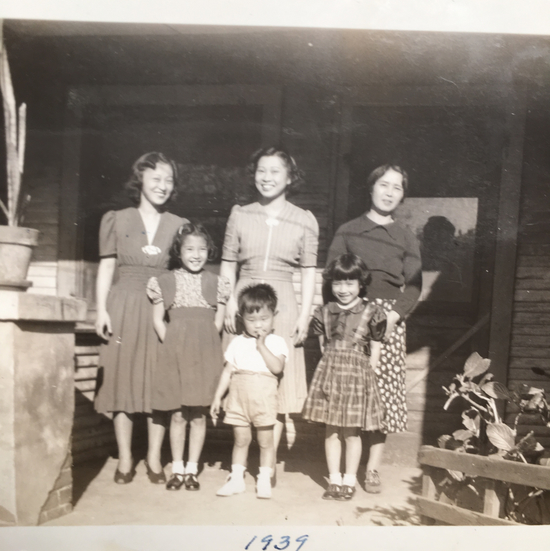 My growing up in West Los Angeles was enriched with a variety of cultures, yet united as American citizens.   Although my family’s ancestry is from Japan, my upbringing was as “American” as those depicted on TV at that time, such as Ozzie and Harriet or Leave It To Beaver.

Throughout my childhood to adulthood, as far as I knew, I was an average American girl, enjoying the California sunshine and beaches, shopping in the big city of Los Angeles, and believing in the American dream of being able to do anything I set my mind to; and I did!

One influence I know is deeply ingrained from my ancestry is gift giving.  As far as I can remember, our family took much joy in giving gifts, not only food and material gifts, but our time and attention.  It’s just what you do.

My parents were always encouraging and supportive.  My brother and I were taught to always show respect, be honest, follow through with your promises, and be kind to others.   We were expected to do our best in school; while being allowed the freedom to explore other extracurricular interests and activities.   I was brought up without prejudices; viewing all worthy of respect and value.

It wasn’t until our daughter was preparing a final paper in high school in 2000 that injustices in my family history began to surface.  History that was previously not included in the American educational system: Executive Order 9066 and the ramifications resulting from this order.

In the process of preparing her report, she researched historical facts and interviewed family members who personally experienced the injustices of Executive Order 9066.

Both my mother and father are of Japanese ancestry and each have their own personal stories.  Throughout the years of raising my brother and I, my parents never expressed bitterness, resentment, or taught us anything other than love and respect for others.  My parents demonstrated the power of choice.  An example of the reality that it’s not the injustices that shape us, it is how we choose to react to the injustices.  We then pass down our reactions to the next generation.

To share just a peek in the window of my mother’s personal story, is a story of my grandmother, Tomiye Araishi, who immigrated to the United States in the 1920’s, took what she learned and used her skills to operate a small nursery on Santa Monica Blvd, called Sawtelle Nursery, to help support her family.  [The area is now known as “Sawtelle Japantown”, and still has many Japanese restaurants, but unfortunately the market, variety store and other businesses have been replaced with restaurants.]

In April of 1942, by Executive Order 9066, she, along with her husband and children, were forced to leave business and home.  The family was taken to the Manzanar Internment Camp located in the desert of Independence, CA.  The area was surrounded by barbed wire and monitored by armed guards.   They were assigned a barrack, one room for the family, community toilets (without partitions), community showers (without privacy), forced to tolerate extreme weather conditions, without freedom to leave the camp until they were released in 1945, at the end of World War II.

My mother’s family was one of the last families to leave the Manzanar, as they had no place to go.  Released with no home and no business.  By grace, a friend introduced them to the West Los Angeles Methodist Church who allowed them to live in the church community hall with a number of other families who had no place to go.  Grandma never recovered her business.  My mother and her siblings re-entered civilization the best they could – facing prejudicial limitations yet determined to survive and succeed. Occupational opportunities were extremely limited to them due to prejudice.  My grandfather passed away seven years after the war ended.

My grandmother, no longer having her nursery business after the war, made what she could by growing plants from cuttings she could find then selling the plantings to local gardeners.  She passed away in 1963 at the age of 74.

My mother had her childhood abruptly altered at age 9, when she was taken into Manzanar Internment camp in 1942.  She was released at 12 years old, to then enter as a freshman at Emerson Junior High school in West Los Angeles, CA.  After school she worked for 25 cents an hour cleaning homes to help contribute to the family welfare.  She aspired to be a fashion designer and was interested in pattern drafting; however, she was not financially able to pay for college and had to work.  Some clothes she designed interested Kiyyo Company, and her design inspired the raglan sleeve pullover top.  Although never having the opportunity to be an acknowledged fashion designer, my mother was OUR personal fashion designer!

Fast forward, both my mother and father’s family members have done well as a result of positive attitudes, sacrificial hard work, innovation, and perseverance.  You would never know of the injustices they lived through at our family gatherings.

On this 75th Anniversary of Pearl Harbor, the subject of Executive Order 9066 or internment may possibly come up in conversation.  However, my hope is that they may not stir up injury, but to bring remembrance of the power we each have to personally impact this world.  I pray that we may renew the right spirit in each one of us – taking ownership of our personal responsibility to choose how we respond to injustices. Are we going to be part of the problem? or the solutions?

Be challenged to be pro-active in choosing healthy personal development and make a positive influence with those around you.  You do have the power to make a difference for the next generation.  You make a difference every day!

Free Consultation
Get Free Newsletters
Sign Up Now
For Email Marketing you can trust.